As hard hit as Georgia was by the Great Recession of 2007–09, the state’s economy was much larger in fiscal 2014 than in 2001. Georgia’s state gross domestic product (GDP) is up more than 14 percent over that time, adjusted for inflation, while real personal income is up more than 24 percent. Yet over that same period, Georgia’s revenue from the state sales and use tax is down 31 percent, inflation-adjusted. The decline in sales tax revenue relative to personal income and state GDP can be seen clearly in Figure 1 below. 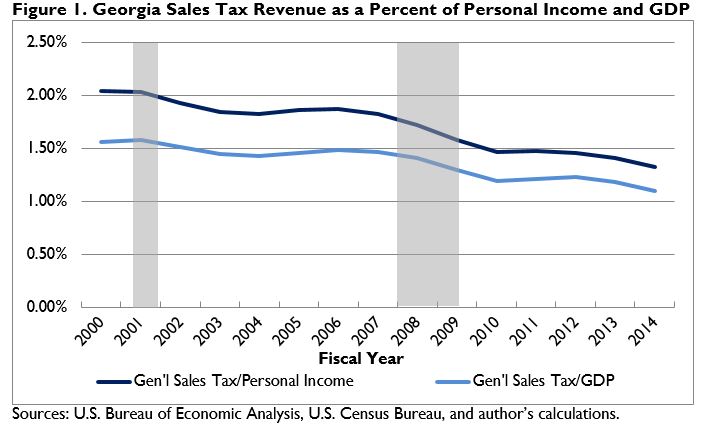 Part of the explanation is legislative. The change in taxation of motor vehicle sales, for example, reduced state sales tax revenues by around $536 million in fiscal 2014, but motor vehicle sales produced slightly more than that in title fee revenues for the state. Other new sales tax exemptions passed since 2000 reduced state revenues by only about $238 million in fiscal 2014, so far more is at work than just legislative action.

The larger factors in explaining the shortfall are changes in household and business spending patterns. Some of these factors are cyclical. Though policy changes can make revenues less sensitive to economic cycles, cyclical factors are generally beyond the control of policymakers and are not permanent. Other factors are secular and likely permanent, but policy adjustments can be made to help ensure that sales tax revenues are able to grow with state budget needs.

For example, households saved more and consumed less in response to the recession, impacting sales tax revenues, but savings rates have since returned to historically more normal levels. Likewise, the decline in new home construction during the recession had a large impact, but this spending has picked up in the last three years. Business investment spending is much larger than new home construction, so its decline during the recession had an outsizes impact on revenues. It has also begun to recover, but remained a significant drag on sales tax revenues in fiscal 2014. With continued economic growth, however, these cyclical factors should go from being a drag to boosting revenue growth.

Among the secular factors, households have been shifting consumption from tangible goods toward largely untaxed services since the 1960s and this trend continues. The impact on sales tax revenues is large and likely permanent, but legislation could broaden the base to bring in more revenues from services. Likewise, the growth of online sales represents a permanent shift in how goods are purchased and, even with the largest online retailer, Amazon.com, now collecting Georgia sales taxes, appears to remain a significant drag on revenues. It may be difficult to tax more of these online sales, but not impossible.